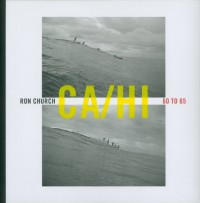 California and Hawaii 60 to 65

Having passed away prematurely at age 39 in 1973, just what led Ron Church to become momentarily fascinated with wave riding in 1960 is left to conjecture….Surfing was going through a quickening, and in hindsight, sad metamorphous during that same period. It had slumbered through prior decades as an esoteric pastime practiced at a scattering of pristine breaks around which gathered small tribes of eccentrics who, blissfully ignored by the mainstream, conducted their improbable dance with such passion that even the “kooks” and “ho-daddies” could sense the wonder of it. Nothing so innocent and evocative is left unfettered for long. Church turned his camera on surfing as it teetered on the verge of becoming a much-ballyhooed happening of wave jocks, plastic surfboards, and manufactured surf wear, complete with its own media. Worse yet, the realization that the still small surf culture was a commercially exploitable “lifestyle” was lurking just around the corner. He was there to capture its last moments of innocence. 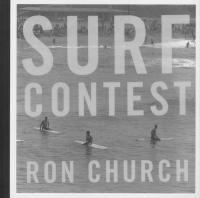 While surfers may look more relaxed than most, and may even be more relaxed, they are not exempt from the human desire to go higher, farther and faster. As the members of the developing surfing world of the early 1960s found themselves striving to surpass one another, and looking to quantify their most accomplished riders, the first surf contests were organized.

These loosely arranged affairs had, as Shirley Richards (Ron’s former wife) recently remembered, silk-screened T-shirts as their prizes. Pretty innocent stuff. At 27, as Ron Church strode forcefully into this arena, he had already accomplished a great deal, first as a jet test photographer, then as an up-and-coming (and ultimately much-awarded) underwater photographer. In his ongoing quest for new material, he brought to surfing a headful of new ideas, camera angles and lighting techniques, at the very moment these earliest contests arose, at the moment that surfing, which had been considered a somewhat off-center activity, began to organize itself and enter the mainstream. Although Church only actively photographed surfing and its surrounding lifestyle for a few short years, he was there at the beginning of its transformation into something big, and, as viewers will see, his documentation of its first contests–which were at once mundane and heroic–brought surf photography to another level. All but a few of these images are previously unpublished.