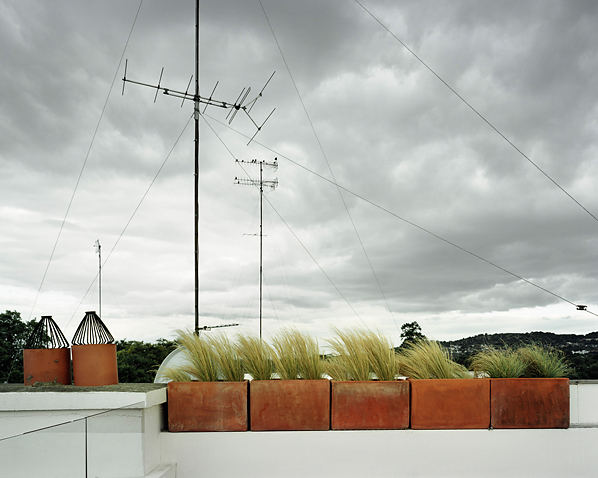 Exhibition is extended to November 28th.

Scott Nichols Gallery is proud to present Rooftop Gardens & Landscapes of Ireland by photographer Brad Temkin. This exhibition draws photographs from Temkinâs study of the Irish and Urban Rooftop landscape, which examines the relationship between humans and their surrounding environment.

Temkinâs Rooftop series documents and celebrates the living roof movement in modern architecture. Temkin traveled around the world to photograph how architects and designers a creatively found ways to offset pollution caused by modern urbanization. The different ways in which these roofs are designed are shown in the variety of subjects Temkin has photographed. These naturalized roofs are not juxtaposed against the urban skyline but are photographed as a natural part of its surrounding environment bringing together our need to recreate nature and harness it to our need during the urban age.

Conversely, Â­Temkinâs Landscape of Ireland examines the relationship between the people and their environment in Ireland. These photographs were during Temkinâs many trips to Ireland. He photographed the Irish landscape with a sense that its inhabitants has have found a way to live peacefully with the land without harming it. Images of man-made structures balanced against the landscape shows Temkinâs deep respect and reverence for the environment of Ireland.

Brad Temkin was born in Chicago in 1956.Â  His interest in music led him to begin photography in 1973.Â  Although his early work began with music industry clients such as Mercury Records, Warner Electra Atlantic, Creem Magazine and several Rock Promoters, his focus quickly changed and he began to photograph other subjects including the landscape and portraiture; finding the poetry in the world around him.Â  Temkin received his B.F.A. in photography from Ohio University in 1979, and an M.F.A. in photography from the University of Illinois at Chicago in 1981.Â  His photographs have been widely exhibited throughout the United States and abroad; and are part of several permanent collections including the Art Institute of Chicago, Museum Of Fine Arts, Houston, Krannert Art Museum in Champaign, and the Museum of Contemporary Photography in Chicago, among others.Â  His photographs have also appeared such publications as Aperture, Black & White Magazine, Grateful Dead: An Illustrated Trip and Strength From Unity: Expressions On Cancer.Â  Brad Temkin has taught photography at Columbia College in Chicago since 1984 and he teaches workshops in Ireland each year.Â  Brad currently resides near Chicago, Illinois, with his wife and daughter.